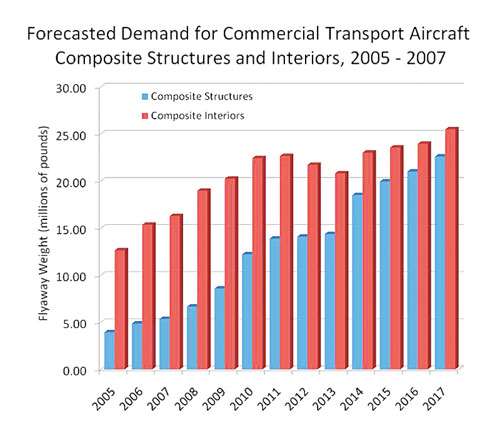 It is undeniable that recently media coverage of commercial aircraft programs, particularly The Boeing Co.’s (Seattle, Wash.) televised 787 Dreamliner rollout, has placed composites and carbon fiber into the public lexicon. Much of the industrialized world now is at least vaguely aware that lightweight “high-tech plastic” is making what were previously all-metal passenger planes more fuel-efficient. This breakthrough for advanced composites couldn’t have come at a more opportune time. It is no secret that airlines — particularly those in the U.S. since 9/11 — have had to struggle to remain solvent, let alone profitable. Although passenger traffic has recovered, fossil fuel prices everywhere continue to go up as emerging economies escalate their demands on petroleum reserves.
Jet fuel prices are already 18 percent higher than those reported in December 2007. Consequently, fuel purchases now represent 30 to 40 percent of a transport aircraft’s direct operating costs. While specifics vary by aircraft and routes flown, “short haul” or “regional” airlines generally can expect to fly each of their aircraft about 3,200 hours each year, with flights between 400 and 600 miles. Assuming an average fuel burn rate of 450 gal/hr (based on a 70-seat Canadair CRJ-700), a smaller “regional transport” could consume about 1.4 million gal of jet fuel per year. At $3.44/gal (the price reported by the U.S. Energy Information Admin. in May 2008), this equates to about $4.9 million (USD) per year. At these prices, even small airlines are running up annual fuel bills totaling billions of dollars.
As fuel costs deflate bottom lines, carriers’ short-term strategies for minimizing passen-ger fare inflation include cutting back inflight services; painfully renegotiating employee contracts and pensions; and, most recently, adding surcharges for bags or those of us who weigh more than the “model” passenger. In the long term, however, airlines are counting on transport aircraft and engine manufacturers to provide solutions that will reduce their operating costs. Little wonder then that commercial aircraft manufacturers have thou-sands of orders for more fuel-efficient aircraft. For several aircraft models, delivery backlogs alone will keep production lines busy for five or six years.

Last year, the market for new commercial transports grew dramatically as new aircraft orders rocketed past 2006’s mark of 2,250 aircraft, reaching 3,364 aircraft. Combined, Airbus Industrie (Toulouse, France), Boeing Commercial Airplanes (Seattle, Wash.), Bombardier Aerospace (Dorval, Quebec, Canada), Avions de Transport Regional (ATR, Toulouse, France), and Empresa Brasileira de Aeronáutica SA (Embraer, São José dos Campos, Brazil) delivered 1,147 new airplanes — an 8 percent increase over 2006. Airbus’ backlog for transports now stands at 3,467 airplanes (2,448 for the A320 series), more than 1,000 above last year’s figure. Boeing’s backlog is nearly identical at 3,438 units at the end of 2007, having grown by a similar number. Together, these companies hold firm orders for nearly 7,900 planes — nearly seven times 2007 deliveries! (The other three companies included in our market outlook, AVIC/Commercial Aircraft Company (ACAC, Shanghai, China), MHI and Sukhoi Civil Aircraft (Moscow, Russia) had yet to deliver their first transports during this period.)
To say that the aircraft manufacturing industry is enjoying a robust period in its history is a mild understatement. Based on current delivery and backlog figures, our independent analysis indicates that during the next 10 years (2008-2017), 14,560 new transports will be delivered. Annual production during this time is expected to grow at an average rate of 3.3 percent, totaling an estimated 1,329 aircraft in 2008 and 1,577 aircraft in 2017. Single-aisle aircraft, seating between 110 and 210 passengers (A320 series, B737 series and C-Series), account for 7,062 of the total. Twin-aisle aircraft deliveries (A330, A340, A350 XWB, B767 and B777), which accounted for 183 aircraft in 2007, are expected to rise to almost 200 units this year and 388 aircraft per year by 2017. Deliveries of smaller “regional jets” (seating less than 110 passengers) are expected to continue their recovery in 2008, growing to 347 aircraft compared to 297 in 2007 and 232 planes in 2006. Replacement demand and growing use of “feeder” aircraft to major hub airports in developing economies is expected to drive annual production of regionals up to about 486 aircraft in 2017.
It is interesting to note the influence of new aircraft programs that are expected to begin making commercial deliveries between 2008 and 2017. In all, 19 variants of eight aircraft models are expected to enter service within this window of time. During 2010, deliveries of B787, B747-8, Superjet 100, ARJ-21, CRJ-1000 and CRJ-700/900 “next-generation” aircraft will total roughly 175 units. By 2014, with the addition of A350 XWB variants, the C-Series and the MRJ, “new generation” aircraft will represent nearly 400 annual deliveries. At the end of the forecast period these new models will account for nearly half of all the planes delivered each year to customers.
In all, 5.36 million lb (2,431 metric tonnes) of aerostructures are estimated to have been produced for the 1,147 commercial transports delivered during 2007. With delivery rates increasing an anticipated 15 percent this year, the total flyaway weight of composite aerostructures for commercial transports is expected to reach 6.68 million lb (3,030 metric tonnes) — a 24.5 percent increase. Year-on-year growth in composite volumes is expected to continue upwards to 29 percent in 2009 and 42 percent in 2010. By the end of the forecast period, the annual market for primary and secondary composite structures is expected to reach 22.6 million lb (10,251 metric tonnes) — representing an average annual growth rate of 16 percent. Over the entire forecast period, the cumulative market for composite aerostructures is expected to represent the production of 152 million lb (68,946 metric tonnes) of engineered composites!
Currently, Airbus’ aircraft products consume more com-posite materials than any other commercial transport OEM — the result of its aggressive pursuit of composites manufacturing expertise throughout much of the past two decades. However, Boeing’s demand for composite materials will readily surpass the Airbus demand as the B787 ramps up to rate production in 2009. In fact, it appears that as deliveries of A330 and A340 aircraft taper off over the next few years (excluding the uncertain impact of military variants, such as the KC-45 tanker aircraft), composite structures demand related to Airbus will show a slight downward trend, after topping out in 2010. Therefore, Boeing’s demand will easily exceed that of Airbus until the latter’s A350 XWB enters service (2013-2014).
Although several of the regional jet manufacturers are pursuing composite structures in aircraft that seat between 20 and 110 passengers with as much zeal as Boeing and Airbus, the impact of these programs will be overshadowed by these larger aircraft. In 2007, regional aircraft accounted for an estimated 12 percent of the demand for composite aerostructures. By 2017, this figure is expected to grow to 13 percent. It is important to notice that “regional” aircraft composites will grow to nearly 3 million lb (1,461 metric tonnes), representing a volume almost five times larger than today’s number. The bulk of new demand for composite aerostructures in commercial transports over the next 10 years will be strongly linked to the success of Boeing and Airbus twin-aisle aircraft, specifically, the B767, B777, 787, A330, A340 and A350 XWB. Over the forecast period, these aircraft families will account for nearly 53 percent of the demand, or 80.4 million lb (36,470 metric tonnes) of total flyaway weight.
The growth curve for composites in aircraft interiors (floor boards, wall panels, overhead stowage bins, class dividers and assorted other components) is much less aggressive because this portion of the market is more mature. During 2007, interiors business related to new OEM aircraft is estimated to have totaled 5.09 million lb (2,310 metric tonnes) — only slightly less than the 5.36 million lb (2,431 metric tonnes) of structural composites produced. Composites already are used extensively by interiors manufacturers — between 3,000 lb and 3,800 lb (1,361 kg and 1,724 kg) per single-aisle jet aircraft, generally, and well above 10,000 lb (4,536 kg) in each jumbo jet. Historically, the aftermarket (repair and replacement) for aircraft interiors ranges between 2.2 and 2.8 times that of the OEM portion. From this, it should be expected that the aftermarket represents an additional 11 to 12 million lb (4,990 to 5,440 metric tonnes) of composite interiors — bringing estimated 2007 flyaway weight for interior composites to 16.3 million lb (7,394 metric tonnes). This volume is expected to increase, as a result of production rate ramp-ups, by 16.5 percent in 2008 and an additional 6.8 percent in 2009. By 2017, annual composite interiors production volume is expected to reach about 25.5 million lb (11,567 metric tonnes), growing at an average annual rate of almost 4.8 percent and representing the production of an estimated 223 million lb (101,151 metric tonnes) of cabin components.

Automation as the enabler

It is important to note that the high cost of fuel and the opportunity to reduce other operating costs could not have stimulated the level of composite aerostructures demand we forecast in Fig. 3 without the advent of automation as a critical enabler. Engineers have taken advantage of composite design freedom to consolidate parts and thereby reduce assembly time and expense, with fewer, larger composite structures, such as the fuselage barrels of the B787 or the large composite wing and stabilizer skins slated for the B787, MRJ, C-Series, A350 XWB and other new programs. Construction of these massive components without automation would be economically infeasible. These massive wing and tail skins and fuselage shells weigh hundreds and thousands of pounds each. While people are familiar with the exterior CFRP of the B787 fuselage sections, much of their mass is composed of internal stiffeners — constituting about 5 km/3.1 miles of composite stringers per aircraft. Considering that composite technicians can place prepreg at a rate of about 2.5 lb/hr, hand layup isn’t a realistic option. These large structures, however, lend themselves to fabrication on automated tape laying (ATL) and automated fiber placement (AFP) systems. In fact, there is a strong correlation between data compiled since the early 1980s on new automated production machines and data on the growth in the demand for composite structures. Successive developments in materials, computer design and improvements to the robotic machines and delivery heads have made it possible for a single robotic production cell to layup prepreg at rates in excess of an order of magnitude faster than by human hand. The five years between 1983 and 1987 provided a lot of the early expertise with ATL and AFP — leading to commercial applications on the B777 and Airbus A330/A340, which entered service during or shortly after this period. As the benefits of automation became better recognized, they were employed in successive programs, including the A380 and several military platforms.
While automated production equipment is not expected to replace hand layup entirely, parts manufactured with ATL, AFP, other continuous laminating process and resin infusion molding will rapidly make up much of the new manufacturing capacity. Prior to 2001, there were less than 100 of these automated production machines in operation — many of them for research purposes. After tracking which components on current aircraft programs already are produced with automated production process (ATL, AFP, infusion molding, etc.), it appears that only 13 percent of the total flyaway weight of primary and secondary composite structures produced for commercial transports during 2007 were manufactured by automated methods. Currently, there are about 250 robotic production machines installed worldwide. Based on what is known about the A350 XWB, the C-Series, the MRJ and several other programs, it is anticipated that automated composite production processes will account for nearly 64 percent of the total flyaway weight requirements for commercial transports within the next 10 years.
New machines produced by MAG Cincinnati (Hebron, Ky.), MTorres (Torres de Elorz, Spain), Automated Dynamics (Schenectady N.Y.), Ingersoll Machine Tools (Rockford, Ill.), ElectroImpact (Mukilteo, Wash.), Forest-Liné (Capdenac, France) and a few others are demonstrating the capability to increase productivity to hundreds of pounds of prepreg per hour — with much better quality and consistency. Moreover, where hand layup can result in material scrap factors of 60 percent or more of the weight of the finished part, the use of ATL and AFP equipment can reduce scrap to between 3 and 10 percent. With carbon/epoxy prepreg prices ranging in price from $55/lb to $85/lb, scrap reduction of this magnitude could save commercial transport OEMs millions of dollars each month in raw material expenses.
Assuming our predictions for these commercial transport programs are correct, it is foreseeable that OEMs will need to purchase 200 additional machines over the next 10 years. Without them, it might not be possible to fully meet the forecasted demand for composite aerostructures.