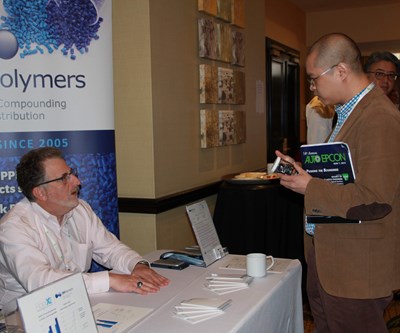 Polyamides were a major focus, in part owing to a global shortage of PA 6/6, which, along with PA 6, is widely used in the automotive industry — both neat and reinforced, for interior, exterior, underhood and powertrain applications. Until supply bottlenecks clear, OEMs and suppliers are scrambling to find other options, such as alternative polymers or recycled PA 6/6, which doesn’t sacrifice performance. It was no surprise, therefore, to see many exhibitors touting PA 6/6 alternatives in their displays, as well as many speakers describing virgin and recycled options. In fact, in his keynote on “Nylon and Polycarbonate: How We Got Here and What Lies Ahead,” Brendan Dooley, global director-engineering polymers, IHS Markit (Houston, Texas, U.S.), discussed the cascade of unfortunate events that caused this situation.

“This segment has had more than its share of challenges,” explained Dooley. “First, a catastrophic 2015 fire at a new adiponitrile factory in China wiped out 18% of the global supply of monomer needed to produce PA 6/6. That plant has not been rebuilt. Furthermore, supplies have been affected by disruptions caused by excessively hot weather, excessively cold weather, hurricanes, utility failures, fires and labor actions. And later this year, an adiponitrile plant in France will shut down for maintenance and upgrades. While eventually the expansion will boost global adiponitrile production capacity, in the short term it will make supplies even tighter.” Dooley foresees PA 6/6 supplies starting to ease in 2020 and says they should be back to price parity with PA 6 by 2022.

Carbon fiber was another big topic, but for different reasons. Last year, only a couple of speakers mentioned — and only a few exhibitors highlighted — CFRTPs. This year, however, they were discussed in at least six different sessions, and in a keynote on “Engineering Plastics and Additive Manufacturing” by Kevin Quinn, director of additive design and manufacturing, General Motors Co. (Detroit, Mich., U.S.). Additionally, several companies introduced new carbon fiber-reinforced PA (CF/PA) materials at the show.

Among these were JM Polymers (Chicago, Ill., U.S.), which last year launched its FiberX2 line of recycled, injection-moldable grades of short CF/PA 6/6. The fiber is reclaimed from aerospace prepreg and the resin is recycled from sporting goods. The initial offering was two grades reinforced at 20 and 40 wt-%, but this year the company was back with three new grades. Two featured 10 and 30 wt-% fiber, while a third featured a hybrid of recycled carbon and virgin glass fibers. 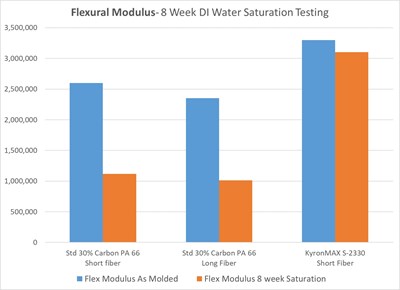 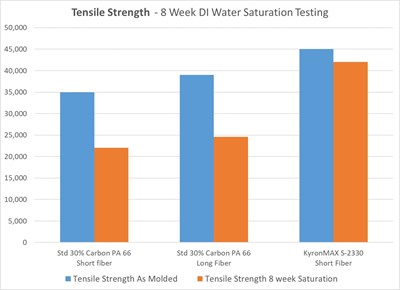 MCAM also introduced its 2300 S series line, which offers the mechanical performance of CF/PA 6/6 with lower moisture absorption and improved chemical resistance. The matrix is described as polyamide but is neither PA 6/6 nor PPA.

A third product debuting at the show that MCAM specifically developed for automotive underhood applications is a higher-temperature CF/PPA grade with both glass transition temperature and continuous use temperature values as high as those for PEEK.

Wojtysiak says that Piper had lacked the resources to target the auto industry on its own, but now that the team is part of Mitsubishi, it’s specifically formulating grades for and deploying people to cover this segment.

AutoEPCON will return in 2020 on April 20 at the Detroit Marriott Troy in Troy, Mich., U.S.