A feasibility study demonstrated the cost- and time-saving potential of replacing a part’s current materials and processes with additive manufacturing.

For more than a century, Joyson Safety Systems (Auburn Hills, Mich., U.S.) has been involved in the design, manufacture and sale of safety components for a variety of markets, including airbags, seatbelts, steering wheels and safety electronics for the automotive industry.

The company recently conducted a feasibility study to explore the potential for other existing materials and processes to improve products such as its Driver Airbag (DAB) housing container, leading to a proof of concept that took advantage of composite additive manufacturing. 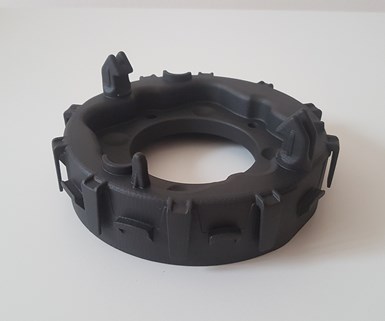 A complete airbag system consists of an inflator, an airbag cushion, a cover and a housing with attachment points to the steering wheel. The airbag cushion itself is located within the space of the housing and the cover.

The performance of the DAB housing part is critical. In addition to holding the entire airbag system in place while the vehicle is motion, the part must also be able to withstand the forces applied to the airbag system when the airbag is deployed. For testing, the material used for the part needed to have sufficient strength, impact resistance and heat stability within a temperature range of -35°C and +85°C.

The original container was manufactured via a conventional injection molding process, and was made from polyamide (PA) reinforced with 40% glass fiber. For the feasibility study, the Joyson Safety Systems team aimed to quickly produce a functional prototype part within days, and they wanted to find a material that exhibited similar mechanical, thermal and performance properties to the original materials. 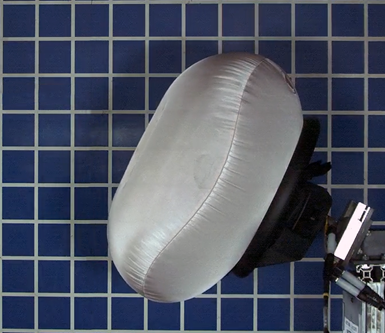 Joyson’s innovations team carried out a market analysis in order to find suitable materials, and ended up turning to CRP Technology (Modena, Italy) for its Windform TOP-LINE range of high-performance composite materials and its in-house 3D printing service.

Specifically, the team chose CRP’s Windform SP carbon fiber/PA material, which exhibits even higher properties than the previous materials they were using for the part. The parts would be manufactured with a select laser sintering (SLS) additive manufacturing process.

The team was able to quickly produce a prototype part and test it within a complete airbag module, demonstrating the redesigned part’s high strength and impact resistance, and thermal stability within a range of temperatures. Compared to the original injection molding process, the new part could also be produced faster using SLS and eliminated the requirement for expensive tooling.

“This opportunity has opened up a variety of capabilities and considerations for a further cooperation with CRP Technology,” says Samer Ziadeh, development engineer on the Core Engineering Materials team at Joyson Safety Systems.