Although they have been overshadowed by aerospace applications, 3D-printed tools also are finding a place in automotive processing. Here's one example.
#airbus #pei #layup 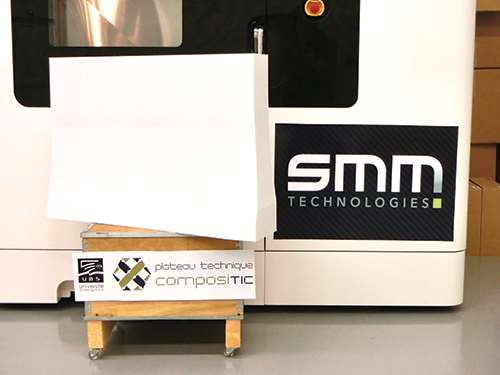 The 3D-printed tool is shown in here during layup with a Coriolis robotic tape layup head. Source: Plateau Technique Compositic

Although they have been overshadowed by aerospace applications, 3D-printed tools also are finding a place in automotive processing. One example is the composite technical center Plateau Technique Compositic (Ploemeur, France), affiliated with the Université de Bretagné-Sud, in Ploemeur. Compositic recently displayed a large, 3D-printed composite layup tool at the JEC Europe 2015 event in Paris.

Yves Grohens, a professor at the Université, says the tool was the result of research that combined additive manufacturing (AM) with robotic automated fiber placement (AFP) and other processing technologies, with the aim to create parts as rapidly as possible. “The concept is to compress the entire part design/tool production/robotic programming and part layup time. We are currently in discussions with several automotive OEMs about this innovative use of 3D printing.”

Grohens explains that his group worked with automaker PSA Peugeot Citroën (Paris, France) on a model 208 demonstrator car roof part, in partnership with robotic system supplier Coriolis Composites Technologies (Queven, France) and SMM (Le Hezo, France), which manufactured the tool via AM. “The idea was to start from the virtual part in CAD, in the form of an .stl, .igs or other file format that is compatible with both a 3D printing machine and automated tape placement programming.”

The tool’s design and shape were developed from the part’s CAD file and its print was begun by SMM, while Coriolis engineers simultaneously developed the optimum part layup and AFP machine path programming. The tool was printed on SMM’s large Fortus 900 FDM machine, supplied by AM equipment manufacturer Stratasys (Eden Prairie, MN, US), with approximately 1m3 of useful build volume. Total build time was about 100 hours.

Stratasys provided polycarbonate powder for the print build, without fiber reinforcement, but Grohens says, “We achieved sufficient stiffness and thermal stability with the polycarbonate for this demonstration tool but, in reality, it would be made with polyetherimide [PEI] Ultem material in production, to enable a higher cure temperature of 180°C and higher pressure. We limited the actual cure temperature of this demo tool to 140°C.”

Tool weight, when complete, was 14 kg. No mold treatment of any kind was undertaken after the print, says Grohens.

Immediately after the mold was completed, it was placed under the Coriolis robotic head to begin the part layup, using 6.5 mm wide carbon/epoxy prepreg tapes. Grohens says that the part layup process, which was completed in a day, was successful the first time, because tool build, part design and robotic processing were developed simultaneously, within the same digital space. He adds, “If we had proceeded with classical mold machining and a metallic tool, requiring test articles to ensure correct layup, this process would have taken at least two months to reach that perfect state.”

Although the untreated mold caused no problem for the part layup and cure, he does add, “The tool surface is a little bit rough, so on subsequent tools, we treat the surface with an epoxy coating that reduces the roughness and provides a better part surface finish.”

Compositic is pursuing similar projects with partners, including Airbus, for 3D-printed tool applications.

This short article is a sidebar to a longer feature article titled "A growing trend: 3D printing of aerospace tooling" and a companion to another sidebar titled "3D-printed fixutres & jigs." (To read either, click on its title under "Editor's Picks.")