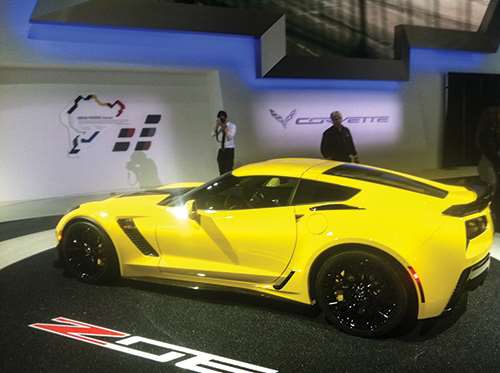 The Chrysler Group’s (Auburn Hills, Mich.) SRT Viper comes standard with a carbon fiber roof, hood and liftgate and a number of composite substructures. On display was this Viper GTS Anodized Carbon Special Edition, featuring a metallic matte exterior color, which will be available to 50 prospective owners in 2014. Source: CT/Photo: Michael LeGault

The 25th anniversary of the North American International Auto Show (NAIAS) was celebrated at the Cobo Convention Center (Detroit, Mich.) in January, giving visitors a chance to view dozens of new production vehicles, models and concept cars, as well as providing them with an up-close look at the rapidly changing face of the industry. In the quarter century since the Detroit Auto Show morphed into NAIAS, auto OEMs have introduced more than 1,300 new vehicle models here — 81 percent of them have been first-time, worldwide unveilings.

As at previous shows, technological change was in the spotlight. Most newsworthy was the rate of change: The pace of innovation in recent years has accelerated, with robust competition for markets as auto OEMs face unprecedented technical challenges. Many spring — no surprise — from the progressively stringent fuel economy/emissions standards now in force on both sides of the Atlantic. CAFE standards in the U.S., for one, will require manufacturers to achieve a fleet average of 35.5 mpg by 2016 and then hit 54.5 mpg by 2025.

Composites and other lightweight materials are expected to play integral roles in the design and manufacture of this next generation of vehicles. An already realized case in point is the much-discussed BMW i3, BMW AG’s (Munich, Germany) first fully electric vehicle, which made its North American debut at the show.

The car features a 22-kWh lithium-ion battery pack, and a passenger cell and other parts constructed of lightweight carbon fiber composites. Significant, here, is the back story: The i3 incorporates carbon fiber supplied by SGL Carbon SE (Moses Lake, Wash.), a joint venture of BMW Group and SGL Group. SGL ACF produces raw fiber from a polyacrylonitrile (PAN)-based textile fiber precursor. The Moses Lake plant now has two production lines running. Together, they are capable of producing a total of 3,000 metric tonnes (6.6 million lb) of fiber per year. The fiber is shipped to Germany where, in another SGL ACF facility in Wackersdorf Innovation Park, they are processed into fabrics. These are cut and assembled into preforms and used to mold parts in a high-pressure resin transfer molding (HP-RTM) process.

BMW also announced that it plans to start production of its first plug-in hybrid, two-plus-two sports car, the BMW i8, in the second quarter. Like the i3, the i8 will feature a passenger cell and other parts made from carbon fiber. (Any lingering doubt in the auto industry about BMW’s commitment to manufacture carbon fiber auto parts was subsequently dispelled in mid-February, when both i3 and the i8 got significant play in BMW’s TV advertising campaign during the Sochi Winter Olympics coverage.)

The winner of the 2014 NAIAS Car of the Year Award, General Motors’ (Detroit Mich.) 2015 Chevrolet Corvette Z06, was on prominent display (see photo, p. 19), repackaged with a supercharged 6.2L V8 engine that delivers more than 625 hp. Like all the 7th generation Corvette models, the Z06 comes with a standard carbon fiber hood. Additionally, its Coupe version features removable carbon fiber roof panels. Notably, all the 7th generation models are manufactured with a substructure made from a carbon nanocomposite. The substructure connects the body panels to the chassis. The carbon nanofilled composite components reportedly save about 9 lb/4 kg compared to previous versions molded from sheet molding compound (SMC).

New to the Z06 is a carbon fiber torque tube, which connects the engine to the rear-mounted transaxle. The car also comes with an optional carbon fiber aerodynamic package, which includes a front splitter with winglets, rocker panels and a larger rear spoiler. The Z06 package also includes carbon-ceramic composite brake rotors.

Nissan Motor Co. (Yokohama, Japan) displayed a number of concept sports cars intended to capitalize on innovative trends in product design and development yet also appeal to more youthful customers. The company’s Sport Sedan Concept car (p. 20) made its world debut in Detroit, with multiple carbon fiber accent components in the front fender and headlamp, as well as carbon fiber rocker panels and a ground-effects package.

Nissan’s luxury brand, Infiniti, introduced the Q50 Eau Rouge concept, a heavily modified version of its production Q50, envisioned as the company’s entry into the performance-car market segment. Although it’s labeled as a concept car, Infiniti president Johan de Nysschen “absolutely insists” that it will be put into production, perhaps as early as the 2016 model year. The vehicle, built around either a V-8 or a turbocharged V-6 capable of generating more than 500 hp, would be on par with performance cars produced by BMW, Audi (Ingolstadt, Germany) and Mercedes-Benz (Stuttgart, Germany). The car on display was built with SMC body panels, and carbon fiber exterior ground effects and interior detailing.